I’m drinking Sailor Jerry’s right now. It’s decent rum, but I feel weird drinking it because I think Sailor Jerry’s tattoos suck, and I don’t understand why he’s so popular. His work just looks cheap and lazy. Is that the point? Do people really like that out-of-the-binder look? It’s fine if you’re a drunk sailor, but you aren’t. You’re some suburban kid having a YOLO moment.

In case my previous ink rant didn’t make it clear, I’m a judgmental snob when it comes to tattoo art, especially the lazy mass produced shit the Rockabilly punks are always getting. Sailor Jerry helped popularize that style, and I just don’t understand the appeal. The dude has a rum named after him, and every tattoo shop I’ve ever been to has had his lazy doodles on their wall for the uninspired to choose from, but just look at it! 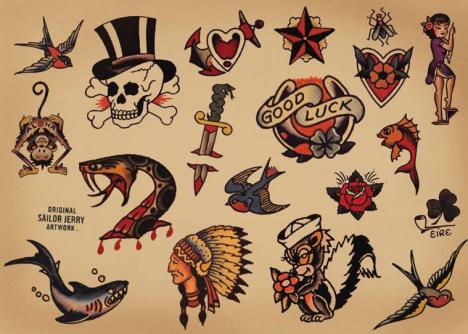 It’s like the McDonald’s of tattoo art; cheap, lazy, and everywhere. Also, one of Jerry’s protégés was Ed Hardy, so you can thank him for that.

Anyway, I know I’m full of shit on this. I plan on getting a mermaid tattoo someday, and that’s about as generic a tattoo as you can get. Still, at least mine will have skillful shading/coloring so she doesn’t look like she’s breaking out with a skin rash. 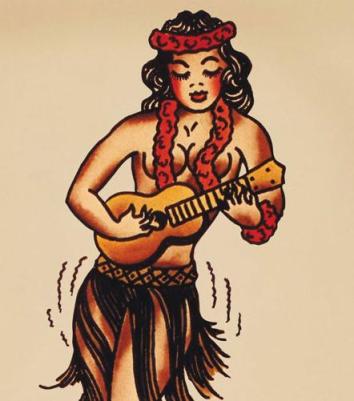 What pisses me off even more than lazy binder tats is when I see people my own age who already have full sleeves done. That shit makes me shake my head like Hank Hill at a poetry slam. Not for the typical “You’ll regret them later/Good luck getting a decent job” reasons, but because they’re young and their ideas are terrible. As they grow older and more mature they’ll probably have stronger, more artistic ideas for tattoos, but they’ll have to stick them on their backs or upper legs because all the prime real-estate is already taken with pictures of Jack Skellington or leopard spots or Nor-Cal stars or whatever other stupid thing they thought was cool when they were teenagers.

I’m still full of shit, though, because I think Rick Genest looks awesome, and I admire his dedication-even if it might be attention-seeking. 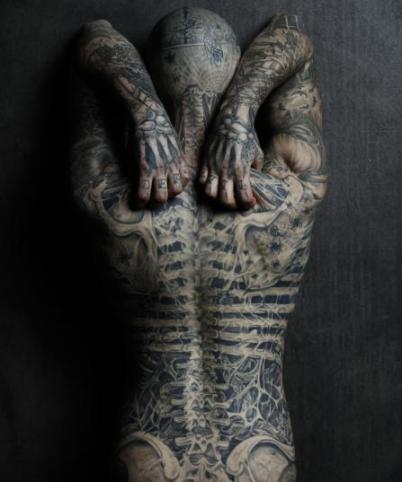 Whatever. I just like quality tattoos. A good tattoo is never cheap, and a cheap tattoo is never good, and considering that I have never given or received a tattoo in my life, clearly my opinion matters. Clearly.

Bored, lazy, ...bored. This site is for dumping all the bullshit I get stuck thinking about for way too long when I should be doing more constructive things with my time, like watching TV.
View all posts by boredkg →
This entry was posted in Uncategorized. Bookmark the permalink.
%d bloggers like this: